Time, the deer, is in the wood of Hallaig
St John's, Bethnal Green 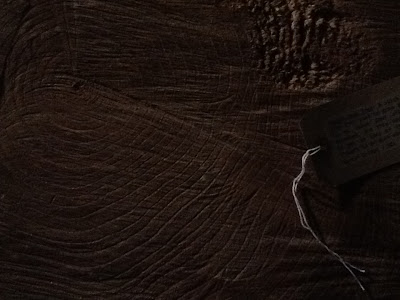 Arrived not knowing very much about this exhibition, except for the tree-related content, and a few images on social media of post destroyed by Parcel Force (true to name, the image seemed to imply they'd tried to force the parcel through a two-inch high letterbox...) and undamaged post containing a poem written, rather beautifully written on a piece of bark. 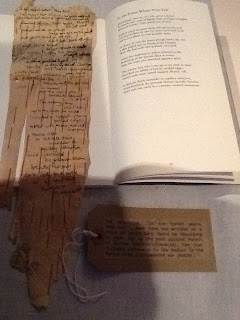 Generally, though, the exhibition blurb was relatively opaque:

“This free exhibition investigates the properties of forest memory through text, archive, and ‘xylarium’, or wood collection. Between the French horticultural term “forest trauma” and Robert Pogue Harrison’s “forests of nostalgia”, a whole discipline around history, witnessing, and the memorial qualities of woodland opens up. Art works examining the cultural expression of time and history in the forest are placed here alongside archival photographs, small press texts, artefacts, and museum objects, in an old, low-lit belfry designed by Sir John Soane.”

Which is exactly how I like it. And I arrived pretending I was a tourist who hadn't been to London for months and barely knew how to get around the tube (mostly true). 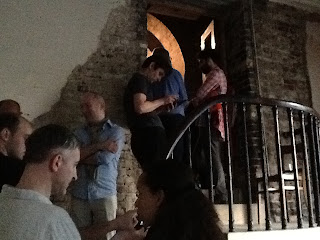 As I walked into St John's, just outside Bethnal Green Tube, the queue for the Belfry exhibition space ran all the way down the stairs to the ground floor. I decided to pop into the nave first to listen to some of the folk music entertaining people in the bar area.

The church itself is wonderfully atmospheric, strangely whitewashed (reclaimed from orthodoxy? puritanised? ex-Catholic?), but ornately designed with an extensive gallery around the hall. The staircase up to the belfry tower was chaotic, crowds aside: half-plastered, all cracked, exposed gypsum and brickwork around the door at the top, the stained-glass window somewhat buckled. 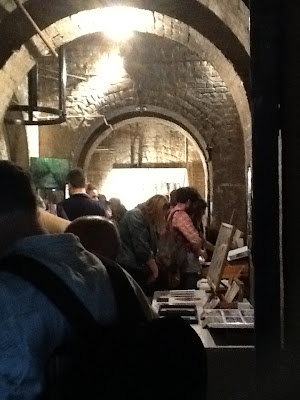 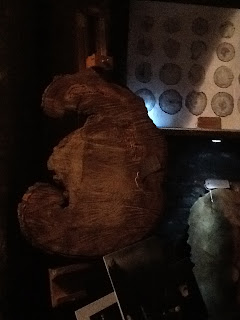 and large, wonderful tree-slices leaning up in corners and on artists' easels. 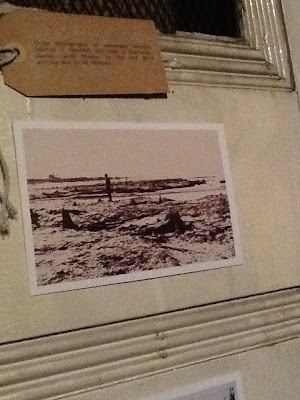 Even the doors had postcards tacked on. 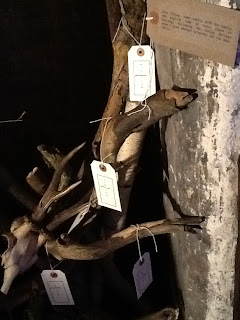 And the room's narrow alcoves had candelabras, or further exhibition pieces, such as Alec Finley's bundles of branches, tagged with English and Gaelic names of the trees.

The lighting was, well, atmospheric, made worse by the many bodies filing in and out along the narrow space and throwing further shadows over the surfaces. But the den-like atmosphere made for a playful mood also, a non-traditional, un-self-important feeling; as if being let loose in an antique shop, or museum, after hours. 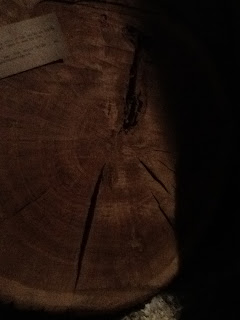 The exhibits also made for a very tactile experience – I had an urge to touch everything, to browse books, and stroke the tree slices (more formally: dendrochronological specimens).

The labels – small auction-style tags, with typewriter text – encouraged this, one or two printed on both sides, several coming detached from their objects or turned over by previous visitors, so you had to pick them up. 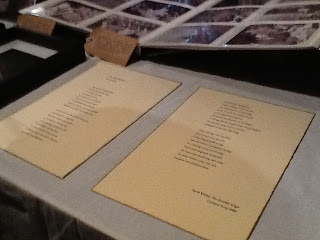 I was surprised to see a copy of David Morley's 'You were Broken', on a table near the door (his word-worm posts and other Strid Wood pieces would have fitted in perfectly here). Partly because I thought I would have seen something on his newsfeed about it. 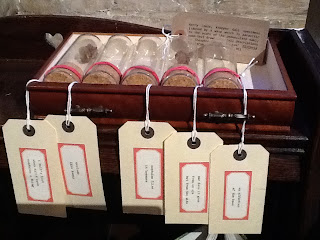 A lot of odd artefacts, such as Gerry Loose's bottle set.

And other pieces that appeared combined for the installation: Camilla Nelson's decayed leaf-words (I think) piled on someone's bundle of branches at the back, with a jumble of collaged artefacts around them. 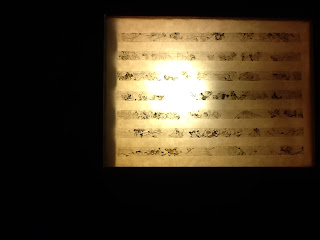 And some smaller moments tucked into corners, or the bottom of cabinets, like a light box with decayed organic fragments, arranged to look like music. 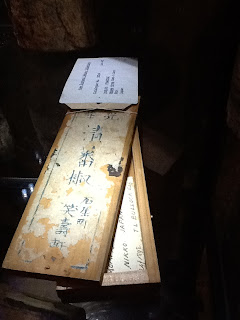 And something like a japanese prayer box, or I don't know what.

The size of the place meant there wasn't much meditative room for studying individual pieces, but that in itself was an aesthetic. 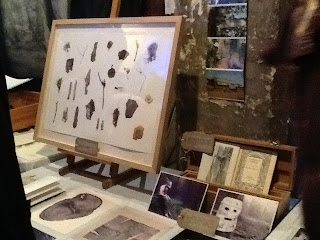 The effect of the whole was like walking into a special 'tree issue' of an art magazine, or climbing into an exploded curiosity cabinet of tree-esoteria, but with an edge of jumble-sale, maybe. 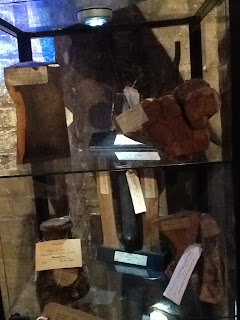 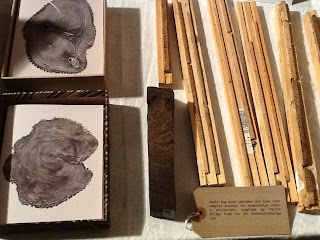 One very nice touch was putting labels on two wooden shutters or panels, which actually belonged to the church, rather than brought in for the exhibition, a well-considered decision for how to treat the environment.

Less so the crowd management – it was too cramped, the sense of people queueing (and one or two loud grumblers pushing their way in or out) made it hard to take time and concentrate on the overall effect of the space. Also the laptop was supposed to be showing a video loop, but the power settings kept blanking out the screen, so there was a giant blue projection on the wall as I went around. The folk performers were slightly dwarfed by the space, also, although the later act seemed more confident. Minor atmospheric gripes, which were more down to the opening night launch than the exhibition itself.

The show is only getting a short run – 6th-11th June – hence a hasty review, more a sketchy photodiary response (I forgot my camera, so these are the best I have, but have a look around the interweb and you'll find other reviews and images). You can catch it on weekdays from 7-9pm, which is Monday and Tuesday this week only! St. John's is a highly numinous building, so worth a visit in any case - they appear to have regular exhibitions on. 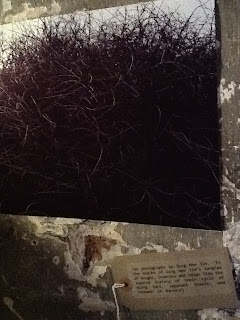 (This amazing photograph is by Sung Hee Jin.)

[Thanks to Anthony Barnett, who emailed with correct information: Sung Hee Jin is from South Korean, and has been living in England for a few years. She has two recent images in print journal Snow.]
Posted by The Editors at 14:46:00 No comments: