Get that?  This is news!  Tonight, the incredibly exciting Infinite Difference, an anthology of new experimental women's poetry, edited by Carrie Etter, and published by Shearsman, is launching in London at Swedenborg Hall, Swedenborg House, Bloomsbury Way, London WC1A 2TH. The gig starts at 7.30, and the line up includes Caroline Bergvall, Frances Presley, Carol Watts, Harriet Tarlo, Andrea Brady, and Wendy Mulford, along with many many other luminaries of avant writing.  What more could you want?  More details here.
On Sunday 14th, meanwhile, Nine Arches Press are hosting another Shindig! at Wilde's Bar in Leamington Spa.  Readers include Luke Kennard, Matt Merritt, and Myra Connell, whose From the Boat is being launched that evening.  It promises to be an exciting night: the Editors will be there with hidden microphones and a sackful of otters.  Be there or be a cube.  I think that's right...  More details here.
Posted by The Editors at 16:33:00 3 comments: 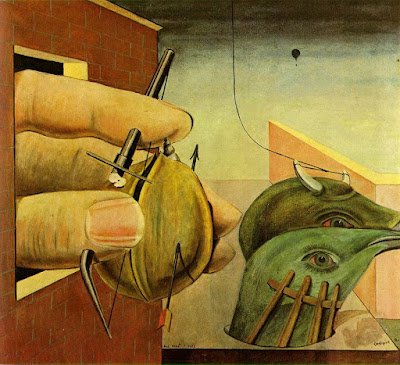 Surrealism, that hoary old conglomeration of Freudian psychoanalysis and good old-fashioned turn of the century French decadence, never really took off in this country, for a number of reasons.  Herbert Read helps to clarify matters in long essay on the subject, where he defines aesthetics not in terms of historical forward momentum - symbolism overturning realism; Modernism overturning symbolism; the Movement overturning Modernism, and so on into the sunset - but as a continuous Manichean struggle between Classicism and Romanticism.  The Classical impulse is towards linguistic and formal order, intellectuation and orchestration, the Romantic towards an overabundance of imagination, a realiance upon organic rather than imposed form (Creeley's dictum that 'Form is never more than an extension of content' comes to mind).  It's an oversimplifcation - or my rendering of Read's argument is a crude oversimplification - but it's a useful one.  Generally, British poetry hasn't trusted Romanticism until its practitioners are good and dead (Keats and Shelley helped matter by dying young), or can be proven without a shadow of a doubt to adhere to old fashioned Tory principles (step forward, Bill Wordsworth).  When they're alive and kicking, writers of a Romantic bent tend to be labelled hellraisers, poetasters and general disruptors of the common good: those writers most lauded in the public imagination, at least in the twentieth century, are of a distinctly Classicist hue: Auden, Eliot, Larkin, Betjemen, all fit the pattern, however greatly their work varies in terms of its aesthetic choices.
Unsurprisingly, Read sees the Surrealists - both on the continent and in Britain - as following the Romantic camp, and his reading of the British Surrealist movement attempts to place them within a tradition of Anglophone visionary writing, including Blake and Coleridge, looking further back to Christopher Smart and the Book of Revelation as founding texts for Brit-born Surrealist practice.
Another reason Surrealism didn't quite take is that it swiftly mutated into something quite different, as its chief exponents - David Gascoyne, Hugh Sykes Davies, Humphrey Jennings - found themselves drawn towards other methods of expressing their poetic vision.  In Gascoyne's case, the limitations of orthodox Surrealism quickly made themselves felt, and his later work fits broadly into the category of mystic of religious visionary writing.  Sykes Davies only produced a small handful of strictly Surrealist poems and, whilst powerful, he rapidly shed that method of composition, and moved towards instead a brand of Eliotean high Modernism, as a critic and a writer.  Jennings, meanwhile, was a pioneer of documentary film-making, as well as having a hand in the foundation of the Mass Observation movement, though neither career-branch was entitrely free from the influence of Surrealist philosophy.  Aside from the defection of its high priests, British Surrealism was, more importantly, overshadowed by the internationalist Modernism of Pound and Eliot, and the more meliorative elaboration on Modernism proposed by Auden, Spender, MacNeice and Day-Lewis.  Later, the New Apocalyptics - Henry Treece, Dylan Thomas, Nicholas Moore, and Norman MacCaig amongst them - raked up the embers of Surrealism, but it was never a coherent movement, and was equally afflicted with the defection and ambivalence of its individual members as British Surrealism had been.
What will follow over the next few weeks will be a series of short sketches of the leading figures of British Surrealism: what I think their important works were, why I think they matter, and why I think they're ripe for re-engagement.  Don't say you weren't warned.  First up: Hugh Sykes Davies.
Posted by The Editors at 16:15:00 2 comments: 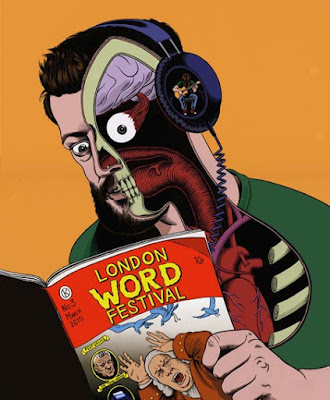 The London Word Festival kicks off on 7th March, running until April 1st.  The Editors are hoping to take time out from their hectic schedules to attend some of the events, but we highly recommend you go along to some yourselves: Leafcutter John's 'Briggflatts Rewired' on March 28th looks especially exciting.  Peter Finch and Hannah Silva are reading at the same event, and both are electrifying performers of their own work.  Other highlights include a performance of M R James' 'Oh, Whistle and I'll Come to You, My Lad' (I recommend James highly, as I gave myself the worst nightmare of my life after reading one of his stories on the cusp of bedtime, which was wildly ill-advised);  and Chris McCabe's 'Shad Thames, Broken Wharf', a play for voices detailing the history of London's Docklands, which looks rather exciting.
Posted by The Editors at 07:53:00 No comments: