Not that this is particularly timely, but just had yet another note from one of the loveliest editors around, Linda Black, about the latest issue of Long Poem Magazine.

The dedication to the sprawl of imagination known as the long poem, which is a rare beast, especially in the wild territories of print mags, is commendable in itself. Yet it's also a magazine that can make a firm claim to pluralism and a great eye for quality.

It's a wonderfully simple design, A4, clean as can be, better use of space than PN Review, which I find a little too dense, especially the italics there, where here it's more about space to breathe, which you need when a poem stretches over several pages.

I went to the launch party for issue 2 (I think), in the Barbican Music Library, ostensibly to see Andrew Bailey, who had an unfortunate bird/swine flu or something.* So I sat through a selection of unknown-to-me poets, including the astonishingly wonderful Sharon Morris (here and here), a tape recording of a US contributor's poem (but I think the battery ran out towards the end, it was that long) and a selection of others, all of whom were evidence that length is no barrier to concentration or entertainment in the right hands.

Anyway, Long Poem Magazine is a highly enjoyable and eclectic artefact, and I've been meaning for a while to both subscribe and submit, though haven't done much of any of that anywhere for a while. Too busy trying to wind Simon up with nonsense postings on here. (Though the Conan posting was NOT a joke, Simon.)

* Incidentally, Andrew's first collection is due out some time in the next year or so. I failed to make a proper mental note last we communicated, but I think Enitharmon, April 2012? This is an invitation to Andrew to correct me in the comments...
Posted by The Editors at 09:00:00 3 comments:

Simon Turner - A Look Forward to a Surrealist New Year 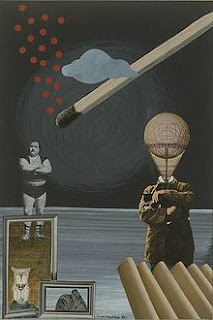 Email ThisBlogThis!Share to TwitterShare to FacebookShare to Pinterest
Labels: although this one is more than a little overloaded with my other obsessions, I can't win, Michel Remy, See? Not all my posts are about war, so in a way, Surrealism


"I just don't see the point in such near parody's [sic] of Olson as, for example, that first poem—I mean, I'm interested to see what [John] Temple can do with his "roots" etc.—but must he swipe the means so obviously from Olson? . . . I know, it's easy to carp, and easy to be negative etc., but the whole thing seems to me to be an easy transcript into what is the currently fashionable American poetic idiom . . . at least it should be possible to avoid the more obvious sort of "I, minimus, of West Hartlepool etc."—or the nervous jerks of Creeleyesque."


"Jeremy has done a review of Dowden for me (which wasn't so much keeping up w/ the scene as that the terms of that particular book seemed to demand some kind of note: Albion arise and all that shit)."


"There hardly seems to be much force holding people together any more. Jeremy wrote (weeks ago) that he's completely disillusioned & lost interest in the whole American Olson/Ginsberg/Creeley thing."

--Peter Riley, in a letter to Andrew Crozier, undated, but after the end of the English Intelligencer.


I found these in an article called 'Wholly Communion, Literary Nationalism, and the Sorrows of the Counterculture', from Framework, Spring 2011 (you'll need some kind of academic login to access that).

The author, Daniel Kane, makes some excellent points about the notion of give and take across the 'big pond'. While explicitly pointing to the idea of a nationally distinguishing literature or poetics, he fails to read the signs of the inferiority complex that the British poetry scene seems to express in its secondary writings.

To put it another way, this background bitching is an indicator of status anxiety, rather than an indicator of serious aesthetic concerns. It seems both facile and misguided to suggest that there's a colonisation, rather than a refreshment, a renaissance taking place, when overseas influences enter a local poetics. The stagnation begins at home. The logic of Prynne's argument seems to point towards a wider picture of paranoia, whereby certain Anglo-American modernists resided in the UK so as to exploit the intellectual resources of Albion and France, relaying back a line of experimental oil from early 20thC European deposits, thereby powering the Buicks of post-War US avant poetry, yadda yadda.

Yet the relationship is a two-way resource, as with any renaissance. The smaller, less capitalised partner - English experimental poets - find a greater, more engaged audience overseas. In fact, quite a few have built their reputations abroad, before being 'imported back', like chopped up tuna in the form of sushi, to our bookshelves - Roy Fisher being a prime example. Ditto on the scale of publishing houses, like Carcanet, or Shearsman, who depend upon US distribution for a relevant portion of their income streams.

At an aesthetic level, the interchange might seem to do with eroding identity, as Prynne and Turnbull seemed to think (as represented in Riley's statement), but then you could also look into the stagnation that's setting in, the need to cut out the deadwood. By 1940, surrealism is old hat; whatever movements are emerging in Europe - Lettrism and Situationism for example - seem to be rehashed derivatives of something fresh.* Understandably, they translate poorly beyond their locales. The localised avant writers in the UK find themselves locked into a struggle with a domineering backlash against experimental writing, as Kane points out: "poets challenging the restrained formalism and hostility to the modernist project characteristic of the British "Movement" poets."

How do you break a struggle? How do you break the entrenchment between two warring nations? (I'm sorry to militarise the struggle between avant and Movement, but--no wait, I'm not sorry. I'm just goading you on again.) You appeal overseas to someone with bigger guns. Olson, Creeley, the Beats: they're the atomic weapons of post-war experimentation in English language poetry. The alliance might seem to renege on locality, on "roots", as Turnbull calls them, but actually this is a misperception. You can't change or escape from where you came from, as many UK-based North American writers will testify - that core of casual xenophobes who call themselves 'English' (Albionians?) won't let you forget, even after a few decades in this country, that you're a foreigner at heart.

What Prynne and Turnbull point towards is not necessarily nationalism. Riley goes a little far in calling Prynne's attitude one of "Albion arise and all that shit", as funny as I find the statement. Prynne's quotation points more specifically to an idea of US-influenced poetry being a false direction for poets to take,** and his review of Dowden (which I've not tracked down, but assume Riley's assimilated before making his statement) suggests that he's promoting a refreshment from English localities as against state-defined nationalism.

~~~ [another of my famous digressions, so go put the kettle on and come back to it in a bit if you're blessed with a short attention span.]

I've lately been immersing myself in Riley's Alstonefield, which is in itself a quest to find alternative meanings for what he sees as the irrational presence of landscape as pre-meaning, yet asserting importance. Why is landscape so important, why this landscape? He rejects, immediately, any effort to align place with national significance: that way lay/lies war. And he classes Prynne's arguments into the nationalist waste bag, rather than giving this taxonomy space to breathe, to become a counter to the Movement's domineering assertion of national identity in formally cleaned up, anaesthetised lines.

Aesthetics is both an enabler and disabler of community and disagreement is a healthy state when multiplicities can co-exist. Movement poetics and avant poetics couldn't co-exist in the minds of critics, but Prynnism and Rileyism was a space, in the '60s, to explore alternatives to the Movement's debasement of 'the language of the tribe'. The dirtily realistic Beat dialects and processes were one way through to an alternative stance. Prynne's counter, that there ought to be an alternative poetics rooted in English landscape, implies a need for taxonomising a distinction against the Movement, against state control, against foisted identities that didn't sit with personal feeling.

There's an indication, then, that the Beats, as a model for British poetics, is as false as the Movement's return to a Victorian, or Georgian formalism as a way out of contemporality. In fact, the challenge facing all post-war poets, perhaps all poets at any age, is not just 'make it new', but to make it discernibly new.

And to celebrate one's locality didn't have to fall into a category of nationalism, despite the dominant trend underpinning recent disastrous ideological expression and, arguably, underpinning the Movement in a crude manner (at least through the squinty lens of the opposing camp). As Kane puts it: "The Beat poets in particular saw no contradiction in positioning themselves as antiestablishment figures while maintaining a marked patriotism that distinguished them from their more internationalist peers."

But I think I'm in Riley's pocket at the moment, reading his poetry. There's nothing quite as alienating as plastering a street with red crosses on white backgrounds, particularly when it's done by people who don't acknowledge the absurdity of culture and nationality.

* Yes, this is an opportunity to come back at me with something a bit more solid and intelligent, but I'm using shorthand, because I'm a blogger.

** I've since heard on good authority (Dan Katz, a Spicer expert) that Prynne was in fact Olson's typist for a brief period - see Tom Clark's 'Charles Olson: The Allegory of a Poet's Life'. This contextualises Prynne's attitude somewhat differently. He's had it from the horse's mouth and perhaps there's a combination of seeing other poets as derivative of Olson et pals, along with a sense of wanting to shake off his own ghosts/literary daddy. This is speculation for the time being, until anyone with a bit more knowledge can add clarification.
Posted by The Editors at 09:00:00 No comments: