Love might arrive soon, and with it realisation – after its arrival I could rest my head on Lansard’s belly and warm my forehead. But the warmth of the body, this arrival of words is delayed. The illustrations could have brought familiarity: the felt-pen ‘wood cuts’, the recurring cooling towers, hidden jewels, the sometimes charity shop trawled granny-ceramics draw together a system, but it’s retaining Love. Somewhere in the fabric it is there but it’s still coming.

Non-arrival means continuation for the half dead scourging figures; they appear in formations of triangles, circles or enveloped in patterns mutilating their neighbour - farting, pissing and shitting on each other surrounded by Lansard’s ritual comforts. Look to the rope, smoke towers, and flagellated bodies with no promise. This is happening because it has to.

It is coming, I’m sure if I lay my forehead on Lansard’s belly I could hear the sounding of those figures: what’s whispered in the ritual is foggy, and what we are confronted with is the body we can smell, touch and hear, and not just see. If my forehead becomes warm it is a volley of life we are dealing with. Now if Love never arrives we’ll have its constituents in sound. Lansard’s accounts are the ‘schlupp’ of our bodies, our “primitive forms of language, before communication by expressive sounds become stereotyped into words, when the voice is richer in vibrations, more mightily physical”[1].

The belch of Lansard’s illustration is an intense body jerk feeling for reciprocity with the world – this formlessness and noise is not derived through hate or bitterness, but a need to reorder what has been represented for us. The placid environment is damaged by Lansard’s intuitive hand: a cock urinates on a tree, blood is spilt and both are absorbed, their gasses returning to the atmosphere through the cooling towers, and suddenly everything is interrupted by intestinal splup or the squeak of an arse.

Soon the allotments will be deserted.
Ray from Bow has made his special salad,
the Cypriot Hassim has sliced his spuds,
nurtured them with salt. In the work shed
they've laid out the last of the harvest,
grapes and olives, leeks, cabbages, parsnips.
Along with the carrots and beets, from
the damp earth they've pulled up their thoughts,
dreams of better lives, the thrill of putting down
a deposit, inheritance; the days that a square
patch of London would breed dates, callaloo,
sweet potatoes the size of your head,
things not seen since childhood, homeland,
the family hearth, some long forgotten feast.

==========
Michael McKimm is from the Giant's Causeway, Northern Ireland. He graduated from the Warwick Writing Programme in 2004 and won an Eric Gregory Award in 2007. His poetry has appeared most recently in Magma, Oxford Poetry, PN Review and The Warwick Review, and is forthcoming in Dossier Journal (New York). His first collection, Still This Need, will be published in 2009.
Posted by The Editors at 09:00:00 No comments:

In creating the Marsh they created
an island. Surprisingly sensible
a solution, appease the bargemen
and the mill owners, let the New River
Company have their fill for Londoners,
simply cut a canal and let the water
take a different course twice over,
one for cargoes up and down from Hertford,
one to turn the stones and grind the corn
to flour. And that was that, flat unbuilt land
lurching southwards towards the Isle of Dogs,
whitewashed lock-side pubs, fishermen
relishing the pike: reservoir, reserve,
an archipeligo conjured from commerce.
Posted by The Editors at 09:00:00 No comments:

Cormorants are landing on the Lammas Lands.
We watch them from the side of the canal,
four black phantoms coming in slow from the north,
all hush-hush, wings arched for the landing,
feet carving a line, long bodies glistening
in the water. Someone needs to document
the birds that use this stretch of water for their nests:
bitterns, grebes and ruddy ducks, great groups
of Canada geese, reed buntings calling thinly
from the willow, the pecking war of coots
and moorhens, the fearful jays, the timid teal,
but mostly the stealth-breaking cormorants,
drying their wings on the branches of trees,
like standards on the blue-shield of the sky.
Posted by The Editors at 09:00:00 No comments:

There is a white wind and a clanging bell
across the marsh, a frisson in the wires
that slice the pitches, where ping on leather
meets the thump of white-paint post, branches
clacking in the trees, tarpaulin unravelling
on the building sites: grit, sand and aggregate.
Think of the causeway that the Romans built
to keep their road going straight to Colchester,
a heap of shale and shattered boulders paved
with smoother slabs set into concrete, the coarse
rudus, the soft nucleus, then curved to let
rainwater slip into the fields. Suddenly
there is an army cutting a line through
the Sunday fixtures, a legion of pallbearers.

This is where King Alfred beached the Danes,
cut channels in the Lea, created the marsh,
and, post-battle, post-hot-scorched summer,
post heady festival of loafmass, gave them over
kindly to the serfs as common land, to graze
their cattle and tackle the unshodden horses.
Land too thick for crops, too wet for housing,
land wept cunningly from warfare, strategy,
pre-planned hard labour of soldiers, slaves,
serfs, was handed over, piecemeal, between
August and March, as feeding space, lambing
land, recreation ground, where people came
from the parishes of Homerton and Hackney
to break the bread, to celebrate the harvest.
Posted by The Editors at 09:00:00 No comments:

What I shall miss is the smell at the end
of the street, the sound of water gushing
under Hackney - marsh-water, Lea Valley
tribulations, all that's dank and dead in
hidden liquid: history mainly, flooded
plains scuttling Viking warships, sewer-tales
and monies made from bodies, layers of clay
and chalk and once-crisp water, drinkable
by seamen down at Limehouse. If you think
of water as the thing that builds a town
you can't imagine living where the river
doesn't run, even if that river is a stream
that swells with rainfall, coming up from drains
and forever whispering beneath your feet.

Gists and Piths will be publishing 'The Lammas Lands' in six consecutive installments. Tune in tomorrow for section two. . .
Posted by The Editors at 09:00:00 No comments: 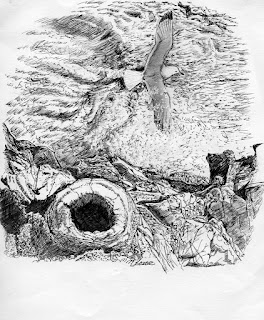 Algae cushions sit that button-hole, as if blind puncture were put to the punches of how flushed-out trees point an undiffraction: pulled limbs are now paws in stone, clawlessly rasping at nest. Bone beds due vertical root-fealty pulverize hollows of shaft in accretive rock. Given such shallow knolls free of primordial root-jam, this contusion of absence is for priming sedimentary verticals and launching forward the stopped burrows of secondary support.

Forest itself a string
lacking interval, final
incursion of the stone
of belonging

Banked in mound, absence has no runway except in scarcity of scoured relief, an incubation pillow refers presence: how loss scooped at a cumulus of instrumentally yoked abandonments. Spongy dependence went rigid at this incorporate latter bowl, whose parafidelity won’t quit defeat-treads retrapping the sieves of site.

Free salt swimmings sapped trunk and then baste in wrap mouths of ruinables cast onto enduring particulars of the non-negotiation. Sustain a stripping from site, deep structure calls for no strapping in the empty bowl. So forest, once fossilized, was never a gallery of conversion but a witness traversing preventions with all retention intact but disappeared.

Tufa formation mounding unique to tree-crown like some modern jacket of the groin: this collar repeats from stock the hollow callus where a tree loses its own branch. The re-pleat snakes the leaves off forest cover with trans-offerable precision, or same ground blames for its badges of lesion. Not cemented to base but folded for inland edge of breach, the primal trunk insertion: hollow sump encombs a ground filling with horizon.

A petrifying spring
of forest absorption,
in saline paces go
integral inscriptors:
occupy strata out of
posts vertical with
reguiding the absence

Algae by the colonial unit courted by trunks soon to be grounded in brine. As secondary mould the rampart is outclan. Defeat primaries took for their reproof any arisen subsidence sounding a razed rod-zone, what phantom spires sitefully elate. How the hollow sockets, sensing open bowl, conjugate the travelling root-sendings of perforate surround.

of attachment:
never hollow enough
socket if it lack
swirl of a place’s
choppy festoons
of prehension

though root is barrier-
pierced tufa goes carrier-
hipped: lifts with
empty fore-cages
to an horizon
its overwhelming


Peter Larkin is Philosophy & Literature Librarian at Warwick University, with research interests in ecocriticism and in postmodern theology. His recent collections include Leaves of Field (Shearsman, 2006) and Terrain Seed Scarcity (Salt, 2001).
Posted by The Editors at 09:00:00 No comments:

"You're a Monster!" - Three Poems by Charlotte Geater

I think, fights, steady in my seat
lining up the contents of my pencil case:
HB pencil, 2B, H, 3B, 6B (no lead), red,
a fountain without a cartridge, dry,
pencil sharpenings, blue, three small highlighters,
rubber, sharpener, yellow biro, blue biro,
black biro, a red pen that I stole
I’m thinking of punching someone in the eye.

I write a note to myself in red –
no, yellow, yellow’s better, harder
to read. I write

I think that’s what always did it.
I’d remember the and, but not what came before
I’d have a handful of change to give
a customer in the pasty shop

I tell people how I feel, sometimes.

“You’re a monster!” he said, because I cut off his hair without asking for permission.

“You’re a monster,” I said, “look at your hair, it’s all over the place.”His hair had cascaded down his neck and throat and sat in clumps on his collar.

“You’ll want to wash,” I said, but I took him to the zoo where we fed elephants and giraffes with unripe fruit because we just wanted to make them hurt.

“I hate the baby animals,” he said, “Don’t they make you want to vomit?”

“What’s wrong with you?” I asked then brushed his hair from his eyes.

The hairdresser’s boy made me take him home and his Dad called me a savage, said

“Do not ever handle scissors again, do not ever touch them ever again,” but I? I wouldn’t listen.

“Condoms are like barbed wire fences for sperm,” you said, “they’re effective when they haven’t been around for too long.”

“Things are different now,” I answered, “sex is boring, one of many dreary things that the media is attempting to sell us. Advertisements make me hate contraception. I want to confound expectations.”

“Do you remember,” you asked, “kissing me through the school fence? My lips bled as I walked home and I didn’t speak to you for the rest of the year.”

“No,” I said, “you have confused me with someone else.”

Charlotte Geater was a winner in the Foyle Young Poets competition in 2005, 2006 and 2007 and a runner up in the Christopher Tower in 2006 & 2008. She is on the editorial staff for Pomegranate magazine.