Because we know you don't come here for Zeitgeist 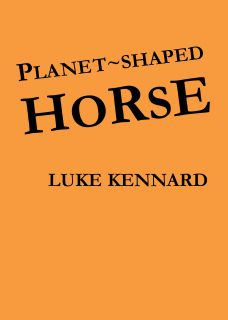 It occurred to me that I should title this post, "The future is prisons and maths", a suitably obscure piece of intertextuality, referring to the indomitable (indubitable?) Luke Kennard's penchant for posting obscure blog headers, while simultaneously calling up Luke's crap sales technique, which runs along the lines of, "I hate myself, my work is crap, please like me a little bit and buy the book or I'll cry."

We've posted about this before indirectly, and this sales technique is only slightly more appealing than the 'do your duty' approach. However, the big news is that this rejuvenated blogging of the Kennardian variety comes off the back of his newly published pamphlet with Nine Arches Press: Planet Shaped Horse. While you're there, have a look at some of the other beautiful poetry books and pamphlets none of whose authors feel the need to self-deprecate themselves through the floorboards.

I once described Luke Kennard as a postmodernist in front of a group of students and quickly retreated from his growling stare; however, I'd like to present a postmodern conundrum for Mr. K. while I'm here:

Luke, your self-deprecation is reinforcing your reasons for self-deprecation. Stop it, or you'll find yourself trapped in a closed postmodernist loop. You are one of the best poets in the UK. You showed us you were more than just a funny, absurdist prat in your third book, and yes, some critics may not have 'got it', but they're all bastards and you've a long and fruitful career ahead of you. The poems I've read and heard you read from this new pamphlet are a culmination of everything great about your first three collections - the humour, the pathos with the disaffected, the insecurity of modern living and the fight against inauthenticity. Planet Shaped Horse is laden with social empathy and boils with the kind of passion that most contemporary poetry would cut its left iambs off to achieve.

Right, so all that screen-licking out of the way, a return to the title of this blogpost. Yes, it's not really zeitgeist, it's just a very tardy announcement of two readings by Luke this week. One is tonight, in Birmingham, with David Hart, Milorad Krystanovich and Simon Turner, among others:

Luke Kennard writes poetry and short stories. He holds a PhD in English from the University of Exeter and lectures in creative writing at the University of Birmingham.
He won an Eric Gregory award in 2005 for his first collection of prose poems The Solex Brothers (Stride Books) which has since been re-issued by Salt. His second collection of poetry The Harbour Beyond the Movie was shortlisted for the Forward Prize for Best Collection in 2007 making him the youngest poet ever to be nominated for the award. His third book, The Migraine Hotel, was published in by Salt in 2009 and was a critical and commercial disaster, leading Kennard to conclude that his star was decidedly sinking. His criticism has appeared in Poetry London and The Times Literary Supplement. He is currently reviewing fiction for The National.

Matt Merritt’s second collection is hydrodaktulopsychicharmonica. His debut full collection, Troy Town, was published by Arrowhead Press in 2008, and a chapbook, Making The Most Of The Light, by HappenStance in 2005. He studied history at Newcastle University and counts Anglo-Saxon and medieval Welsh poetry among his influences, as well as the likes of R.S. Thomas, Ted Hughes and John Ash. He was born in Leicester and lives nearby, works as a wildlife journalist, is an editor of Poets On Fire, and blogs at Polyolbion.
===
I'm going to both. I have Matt Merritt's new collection already, and was forced at gunpoint to try and pronounce it in one go. Fortunately, my Greekness didn't let me down.
Hydro - water
Daktulo - finger
Psychic - Russell Grant
Harmonica:
Posted by The Editors at 11:52:00 No comments: